OMG OMG For weeks I have been watching Sarah from http://seesaraheat.wordpress.com/ Eat the same thing for breakfast and every time I saw the picture, I would crave it and this morning I woke up and this is all I wanted to eat lol... 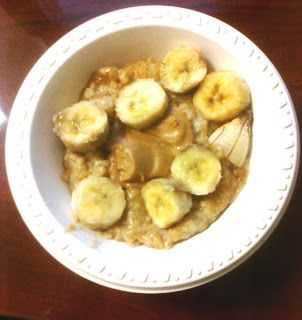 Wow this was heavenly! The PB and banana blended so well with the Oatmeal; I did not want this bowl to finish...thanks Sarah!!!!

As I mentioned ayer I was going to meet up with Sophia from http://burpandslurp.wordpress.com/ who was visiting NYC and two fellow New Yorkers, Jen from http://jenacg-jen.blogspot.com/ and I met Joanne from http://joanne-eatswellwithothers.blogspot.com/ for the first time too!

The plan was to go to this Restaurant called Green Pea on 5th Avenue but when we arrived, they had closed the seating area...which SUCKED because I had been studying their menu alllllllllllllllll week! We decided to walk around and find another place and we came across this little Cafe which basically had the same food as Green Pea...I ordered the Chicken Fajita Panini which was grilled chicken, cheddar cheese, roasted peppers, caramelized onions, and salsa, I paired it with a small bag of Stacy Chips and a Diet Pepsi. 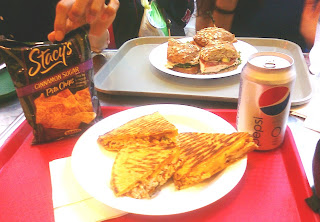 The food was pretty good but the company trumped it! I had a really great time and it was nice to speak with other people who have similar interests. Sophia is the sweetest thing! I think Jen and I scared her off a little because we are the typical "loud and talkative" New Yorkers, and I think we were too much for her (I hope not) ...Joanne was really nice too and I am so impressed by her...she is only 22 years old but is studying in Cornell University and wants to study Cancer Research in the future. Also, check out her site if you are looking for some yummy pasta recipes, the girl has got it down! All in all I had a fabulous time =)

Oh and we split a "Red Velvet" Cupcake...the reason for the quotation marks is because this tasted nothing like Red Velvet Cake...it was just sponge cake with food coloring lol 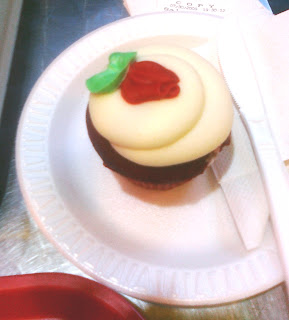 Today I woke up a little later than usual because I could not knock out last night, I blame it on the Diet Pepsi that I had with dinner. I crawled out of bed around 645ish and ate half a Banana before my workout 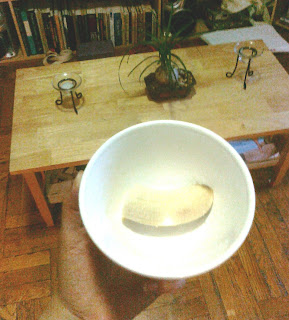 I did the Quick Version of No More Trouble Zone on Exercise TV and burned 285 Calories in 35 Minutes. After my workout I had 1 scoop of LMM 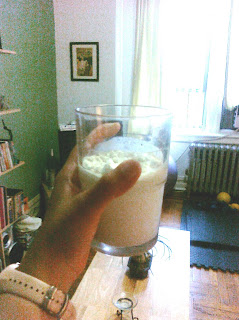 It is another rainy day in NY and I am hoping it clears up because we have tickets for the Mets game AND tonight is Latin night at Citi Field!!!! AAAAAAAAAAAND one of the chicks from the morning radio show on Z100 is going to be the announcer! OH I hope it clears up! (((((fingers crossed)))))))

Have a great day everyone!