Usually when I over sleep, I am like "F It" and skip my morning workout and that is almost what I did this morning. My alarm went off at its normal time of 6am but I hit snooze about 3 times and did not roll out of bed until 6:30ish. I decided that even a quick workout is better than no workout at all because then I would not have to make up the entire 500 Calories in the afternoon when it is much hotter in my apartment EVEN with the AC on. I live on the top floor so my apt gets very warm from the sun beaming on the roof. I ran/powerwalked for 35 minutes and did 10 minutes of Yoga Stretches and burned 448 Calories.

Eats and Workouts
Ayer after work I had to run to get an oil change and while I was there they scared the crap out of me and told me that I needed to change my brakes ASAP. After I was finally done, I rushed home to do my workout so I could eat dinner before 7:30PM (I hate eating late). I did Boost Your Metabolism and omg did I SWEAT! I was literally slipping on the floor when I was doing Mountain Climbers. I burned 505 Calories in 55 Minutes. For Dinner I had another Burger (gotta use up those buns lol). This time I had the Turkey Burger with 1 slice of American Cheese, a WW Bun, and Homemade Guacamole, I paired it with 1/2 a serving of Ore-lda Fries 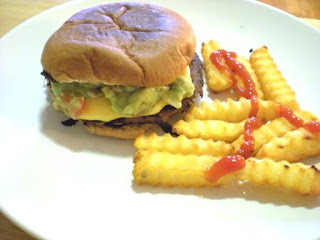 After Dinner I had 1 tbsp of PB 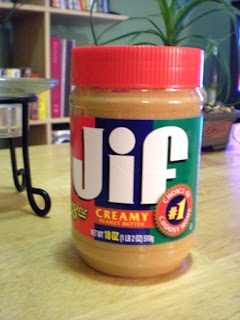 Before going to bed I played with my Wii Fit and did Step, Hula Hooping, and Yoga and burned 158 Calories in 40 minutes.

This morning before my workout, I had 1/2 a Banana 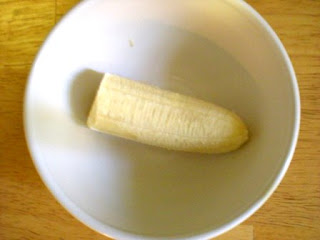 And after I was done, I had 1 scoop of LMM 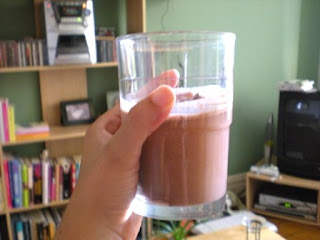 For Bfast I had another yummy bowl of Kashi Oatmeal with the other half of my Banana and 1 tbsp of PB, and my usual (Iced) Coffee 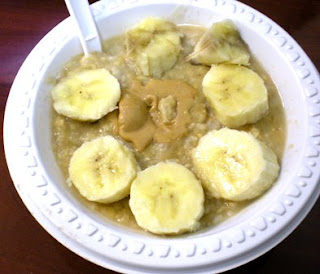 My Story.
Lately I have been reading blogs and I love that some people are so honest with who they are and I felt the urge to share my story with you guys.
As you all know I have been trying to lose weight and some of you might notice that it is not coming that easy to me. The main reason for this is because I have PCOS which is Polycystic ovarian syndrome which is an endocrine disorder that affects approximately 5% of all women.[1] It occurs amongst all races and nationalities, is the most common hormonal disorder among women of reproductive age, and is a leading cause of infertility.[2][3]
The principal features are obesity, anovulation (resulting in irregular menstruation), and excessive amounts or effects of androgenic (masculinizing) hormones. The symptoms and severity of the syndrome vary greatly among women. While the causes are unknown, insulin resistance, diabetes, and obesity are all strongly correlated with PCOS.
They put me on Birth Control which I have been on ever since and they recently put me on Metformin but that really didn't do anything for me so I stopped taking it. Having PCOS has really messed up my self esteem, I have some problems with my body that is directly linked to this. I wont get into the gritty details but its enough to drive me to tears.
When I blew up.
When I was around 21 I met this guy and we moved in together pretty fast. We were together for about 4 years and these were somewhat hard for me. He was both emotionally and physically abusive to me and I turned to food to feel better. He was also a big guy and I had the mentality "well if HE is big, I can be too". All we would do is EAT EAT EAT. I have so many memories of us laying on the bed eating Huge Greasy Heros and washing them down with Pints of Ice Cream and Chips; this was the norm for us. Before I knew it, I tipped the Scale at 220 lbs

Things take a turn for the worse
In the 3rd year of our relationship, my ex suggested that we should move near the beach which I thought was a great idea but I hated the fact that I was far from my family. The rent was pretty steep but together we made it work. As I mentioned earlier my ex was a big dude and he was very unhappy in his own skin. He decided that he wanted to get Gastric Bypass Surgery and I supported him on his decision, in fact I am the one that found his surgeon etc. The morning of the surgery he was crying (tears of joy) but by the end of the day they turned into tears of grief. After hours in surgery, he woke up thinking that his surgery was a success but his doctor informed him that they were not able to perform it. They told him to lose 40 lbs and they would try again but this time with the Lap Band instead. I nursed him back to health and helped him lose the 40lbs and after a few months, the 2nd Surgery was a success. He started to lose weight in rapid speed and here I was still in the 200's. I decided to start working out and did Weight Watchers; I started to lose weight too but no where close to him.
After 3 months or so, things started to really change between us and all of a sudden he wanted to break up. He said he couldn't do it anymore and he moved out! This shook me to the core! Wait you are leaving ME? The one who helped you? The one who was ALWAYS there for you?! The one who took all your crap and still stood by your side? are you F'ing kidding me?! and yup he was gone.
Hold on to your seats...
I used to have a patio and would usually sit outside and listen to the waves to clear my head and one day I was out there already feeling like crap and I see his car. I looked closer only to see him sitting in the passenger seat and a girl driving! The ASSHOLE left me and shacked up with some girl right across the street for me! I was in my own hell. I was living in an apartment that I could not afford, my commute turned from driving to work in 40 minutes to taking 2 trains and 2 buses for 2 HOURS because stupidly I donated my car to charity and would use his car to get to work. I was at a all time low. I was VERY Depressed! I would not leave my house and all I would do is cry and cry. Not only did he move in with this girl but he MARRIED her AND had a son! (they are divorced now). I tried to take my life two times, once by trying to cut my wrists and the second time I took a bottle of pills and washed it down with Bacardi. The only reason I survived the 2nd time is because I threw up in my sleep and woke up over 24 hrs later completely covered in vomit.
The Other Side
I saw what all my antics were doing to my family and I knew I had to stop but I knew I could not do it alone. The person that saved my life was my niece; I did not want her growing up not knowing her aunt. At that moment I started to search for Therapists in my area and with the help of her and of course some "happy" pills, I was feeling better. I started to use exercise as my drug of choice. With every punch in Tae Bo, I was saying F U to the past. In 8 months I dropped down to 138lbs. The only good thing my ex ever did for me was leave me! I used the anger I felt at the moment to motivate me to work harder. And after about a year, I was happy again... 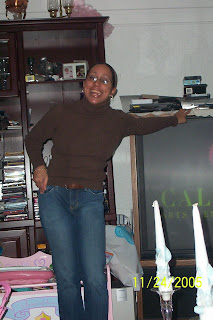