Back in the late 80's this cartoon came out called All Dogs Go To Heaven and my favorite thing about this movie was when the little girl, Anne Marie would say "Chaaarlie" to her dog. It was the cutest and sweetest thing ever. For the past 2 days, I too have been saying "Chaaaarlie" but the tone in my voice is neither sweet nor cute... it down right painful! I have the worse Charlie Horse on my right Calf and it's not going away; it feels super tight and I know the unbearable pain is right around the corner. Have you guys ever had this sort of pain? I don't get it where it came from because I have been really laid back with workouts since I have been sick. The only thing that I have been doing is Step with my Wii Fit but that is no where near tough.


On to better news... last night I had the best time with Missy from http://www.missymaintains.com/. When I found out that she was a Queens girl AND that she liked Sushi; I knew I had to take her to my Beloved Ginza. I picked her up around 7 from the train station...I saw her waiting and called her cell phone "Hey you see that nice Lexus right in front of you, well I am the crappy car right behind it". It's always scary when you meet a fellow blogger because yeah you may get along great via the web but how will you "click" in person. Thankfully we got along great! We had great conversation and actually shared some personal things with one another which felt nice =). 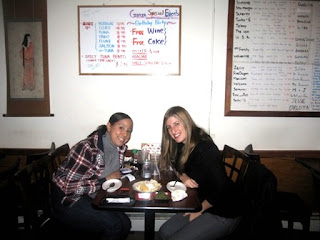 We started off with some appetizers 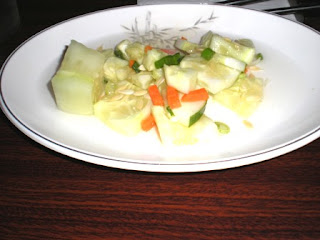 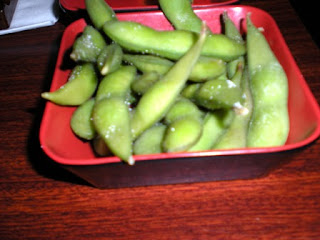 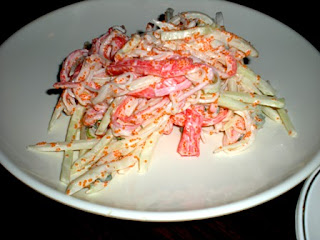 We ordered 3 rolls to share, the first was the Godzilla which I had to make sure Missy tried! the Godizilla is Fried Spicy Tuna, Avocado, Scallion, Masago and topped with Spice Sauce...simply amazing. The second was the Liki 4 which is a Spicy Shrimp and Crab Roll and the third roll was the Cas which Missy picked..it was Spicy Salmon, Yellow Tail, Avocado, Topped with Masago and Mango. All three rolls had brown rice which I prefer and thankfully she did too =) 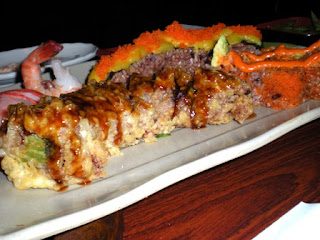 We were both pretty stuffed but wanted to try the Fried Ice Cream. 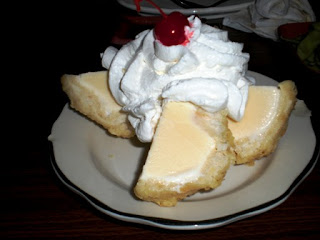 Honestly, I have no idea how this tasted because my nose was still stuffed up and I could barely taste anything but I did get a faint taste that reminded me of a Zepole. I stopped eating this after two bites since I couldn't really enjoy it but it looked pretty lol.

I think it was a fabulous bloggie meet up...we laughed, ate, and enjoyed the people around us including our waitress who was doing Sake Shots with the table behind us lol.

After I dropped her off, I went back home to upload some of the pics and tm'ed her and it turns out she was doing the same thing...Gotta love us bloggies! (addicts)

Missy, next time you are eating Octopus Salad! ha

This morning I woke up and hoped that my leg felt better but nope not so much and to make it worse, I could barely breathe. Why are colds always worse in the morning? I decided to take it easy and just did a 20 minute Circuit which included 15 Kettle Bell Swings, 15 Push Ups, and 15 Situps (I have no idea how many sets I did) and 5 minutes of Stretching and burned 153 Calories.

For Breakfast I just had Honey Oikos, mixed with 1/2 a Banana, and PB with my usual coffee on the side. 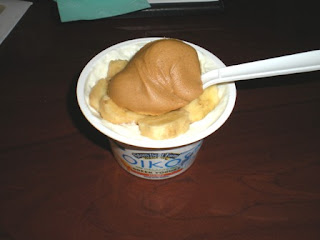