When I asked you guys to wish it not to rain, I should have included "And please don't let the school cancel the trip even though the rain has stopped". I woke up this morning and it was still raining and dark but as the morning progressed the clouds parted and the sun was peaking through and this totally made me happy until 8:30 when my sister called me "don't bother coming, they put signs up stating due to the weather, the 1st grade trip has been cancelled" and I could hear my niece in the back crying her eyes out "WHY MOMMY WHY IS IT CANCELLED" ...my sentiments exactly. So here I am at work, why waste a day off when I can just save it for the next trip. Sad panda.


I think my boss was trying to starve me out ayer because they did not go to lunch until around 1:30 which meant that I did not get to eat until 3ish (they bring my lunch back for me). By the time I ate, I was so hungry that I lost my appetite... if that makes any sense. I ended up ordering Chili and 1/2 a Cuban Sandwich with no Pork. I had to force myself to eat this...I did not finish all the Chili though. 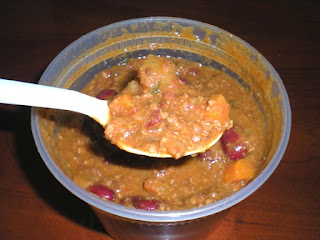 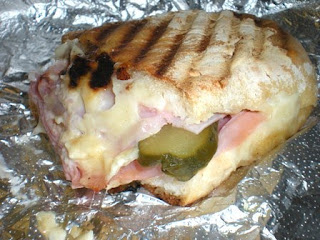 I was feeling very weak in the afternoon so I decided to skip working out but ended up doing laundry which in itself is a workout lol...I have to go up and down 4 flights of stairs at least 3 times lol

After I was done I decided to have dinner but still was not hungry so I just wanted to have soup and dessert! Have you guys seen these new Cambell's V8 Soups? Ever since I saw the commercial, I have been dying to try them. I had high hopes when I purchased the Butternut Squash Flavor since it was the only one that was almost sold out. This soup did not disappoint! It was so rich and creamy and also it reminded me of babyfood which as some of you may know, I still eat from time to time ha...the only draw back may be the Sodium in the Soup which is 750mg per serving (1 cup) but besides that it is 140 Calories, 2 Grams of Fat, 28 Grams of Carbs, 3 Grams of Fiber, 3 Grams of Protein which I think (my opinion) makes up for it. If you guys are looking for a quick soup which will warm you up when it is cold outside; give it a try. 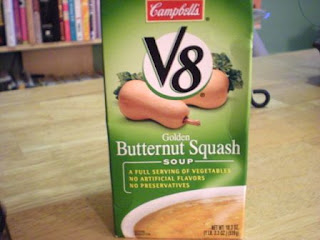 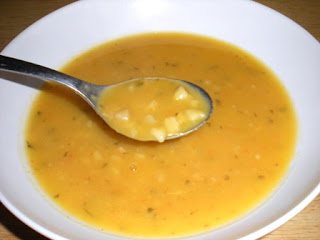 And for Dessert...Cookie Dough Lil Drumstick 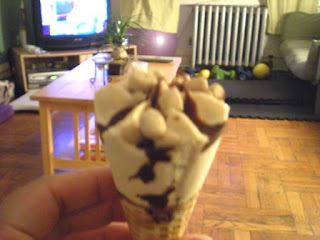 This morning I was still feeling weak and maybe I should have taken the day off but I pushed through it with some stops here and there. I did Jillian's Kickboxing DVD, 30 mins of Upper Body, and 5 minutes Stretch and burned 437 Calories. This workout was so grueling.

I thought the trip was still on so I ate a quick breakfast after my workout. I mixed together Chobani Honey Yogurt, Libbey's Pumpkin, Vanilla Extract, and Cinnamon...I took a bite and realized something was missing lol...PEANUT BUTTER which I added after snapping the picture...and my usual coffee 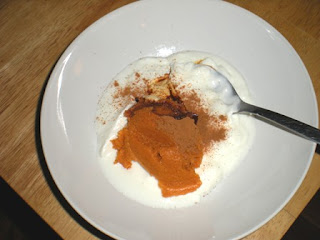 Have a great day everyone!!!!