I am not sure if any of you ever heard of The Day of the (three)Kings so here is a little explanations from wiki:

In Spain, and some Latin American countries Epiphany day is called El Día de los Reyes (The Day of the Kings), i.e., the day when a group of Kings or Magi, as related in the second chapter of the gospel of Matthew, arrived to worship and bring three gifts to the baby Jesus after following a star in the heavens. This day is sometimes known as the Día de los Tres Reyes Magos (The day of the Three Royal Magi) or La Pascua de los Negros (Holy Day of the Blackmen) in Chile, although the latter is rarely heard. In Spanish tradition, on the day of January 6, three of the Kings: Melchior, Gaspar, and Balthazar, representing Europe, Arabia, and Africa, arrived on horse, camel and elephant, bringing respectively gold, frankincense and myrrh to the baby Jesus. Children (and many adults) polish and leave their Three Kings Dayshoes ready for the Kings' presents before they go to bed on the eve of January 6. Sweet wine, nibbles, fruit and milk are left for the Kings and their camels. In Mexico, it is traditional for children to leave their shoes, along with a letter with toy requests for the Three Kings, by the family nativity scene or by their beds. In some parts of northern Mexico the shoes and letters are left under the Christmas tree. The shoes may be filled with hay for the camels, so that the Kings will be generous with their gifts.

I like to call this day Christmas Part 2 lol. We usually exchange gifts today but times are tough so we are just going to go to my mom’s house and order din din from Lenny’s and I made my famous Cheesecake for dessert. It should be fun =)

Ayer for Lunch I had 1/2 a cup of Brown Rice with 1 cup of Spanish Style Roman Beans. I hope you guys are not tired of seeing this 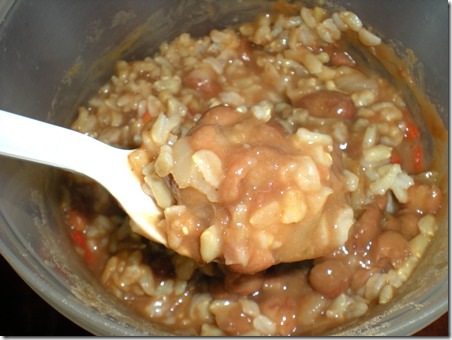 Whenever I make this, it tastes more and more like mother’s…she would be so proud!

After work I had to rush to Auto Zone because my “service engine light” came on again and I wanted them to run a diagnostic on it. After that I went to the supermarket to grab some more Kale and other things. It’s so sad that everyone that works in the supermarket knows me, I go there WAY too much. I came home and dropped off my groceries than ran BACK out to drop off my car at the mechanic so that he can work on it today. By the time I started to cook din din, I was rushing around. I decided that it was too late to bake the tofu so instead I made a stir-fry. I threw it on the stovetop with Peanut Butter, Sesame Teriyaki Sauce and Szechuan Hot Paste. I paired it with left over Cranberry and Apple Dressing and Kale Chips 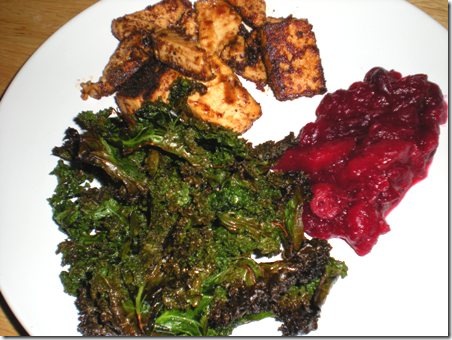 I was soooo tired last night and had no urge to workout but I refuse to stop my January Jillian Challenge so early in the game. After a couple of hours of talking myself into it, I finally dragged my bum off the couch and did my scheduled workout with the Fitness Ultimatum and burned 380 calories in 40 minutes. I have been trying to get in contact with someone in the technical dept because for some reason the game is not giving me a score at the end of the workout. It’s supposed to tell me how I did with each exercise but for the last two workouts, all I get are zeros! And Mari doesn't get zeros! UPDATE: on the phone with them right now.

This morning I woke up around 8:30 and just loafed on the couch; I heart “Staycations”. For Breakfast I had Chobani Strawberry Yogurt with PB and 2 Oatmeal Raisin Cookies and my usual coffee on the side. 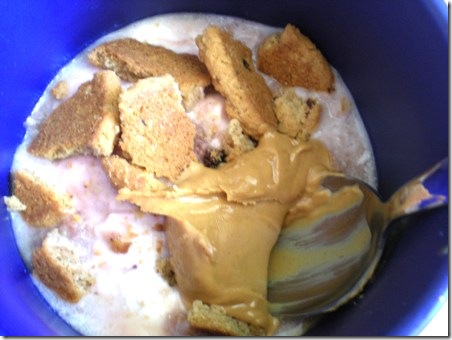 Jillian Update: I just got off the phone with Larry from the tech dept and he told me to workout again and see what happens so I am off to get my ass handed back to me by jil jil…Have a great day!!!!!!!