I should be sleeping right now but I am far too upset. The last time we spoke I was waiting for my mechanic to come pick up my car to fix the radio but so much has happened since then…

Around 1 pm my mechanic called me and told me that he would be right over to get my car…when I heard my doorbell ring at 2, I assumed it was him. I WAS WRONG! Instead it was Super…he ran up the stairs and told me that my car was STOLEN and that the police were downstairs. As I was running down the stairs, I hoped that they got the wrong car BUT I knew it WAS my car because my super sees it everyday. I tried to keep it cool while I spoke to the police officers but the tears were building up.

From what my super told me, this is what happened…He saw some kid fussing around with my car and he asked him what he was doing and the kid said that it was HIS car but my super called him a liar and told him that he knew the owner of the car. The kid proceeded to tell him that he was part of my family and that it was okay. My super didn’t want to physically restrain him because he didn’t know what he had inside of his jacket so instead he called 911 and buzzed my doorbell. While he was on the phone with 911, the asshole managed to turn my car on, do a U-turn and drove off…2 seconds later, the police arrived.

and just like that my baby was taken from me.

I drove around the neighborhood with my mom for over 2 hours hoping that I could find her but nothing turned up.

My eyes are puffy from all the crying I have done. I know some people will say that she is just a car but she was MY car and I feel violated! MY dad got her for me when I was going through a VERY difficult time in my life and ever since then she has been by my side. YES she would break down and YES I spent a lot of money on repairs but she WAS MY CAR! AND She was NOT JINXED! I loved my car because when I needed her, she was there. She was my freedom and my security.

I KNOW that I shouldn’t get upset over superficial shit and that there are people that have it far worse than me but I can’t help it.

Along with my car, ALL (about 6) of my “green bags” were stolen including my Oikos Yellow bag which I loved dearly, the headset for my cell phone, Shovel, Eddie Bauer Ice Scraper, iPod connector, and my niece’s first car seat.

I am emotionally drained. Today was supposed to be a good day. I woke up feeling hopeful because I was planning to do something very important that was supposed to change the course of my life but instead this happened and now I have to put that on pause.

Thank you to everyone who follows me on twitter and sent my positive vibes, I really appreciate it! I am trying to stay hopeful…

You will be missed…. 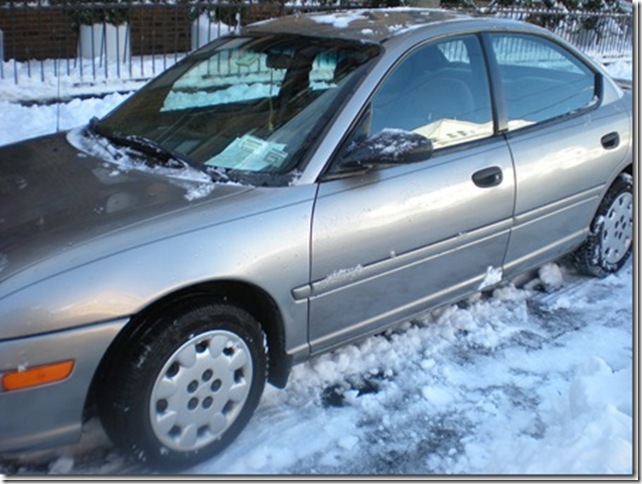