HEY LOVES! I am so sorry that it took me this long to write my race recap. I was waiting for the Organizers to post the official times which they finally did!

The race started at 10 AM and thankfully it was held at Forest Park which is where I run at all the time. My mom and niece went with me…I love that my family is so supportive. 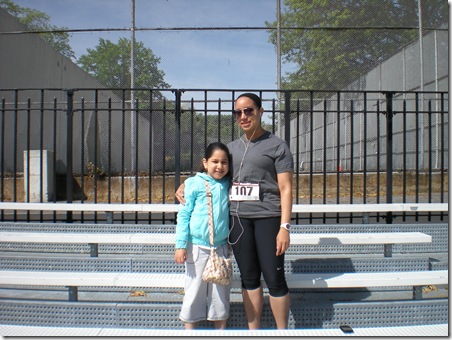 It was a pretty nice turnout…I expected to only see about 200 people there (last year 203 participated) but there were at least 300 people. 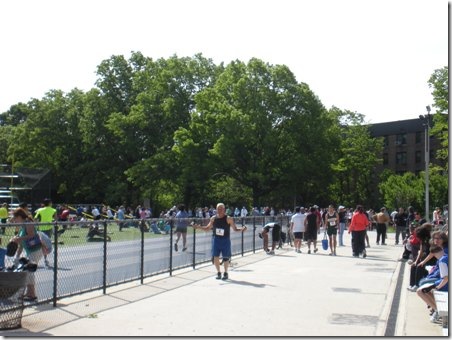 The race started on the track… 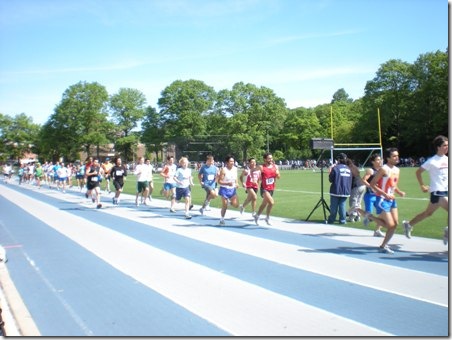 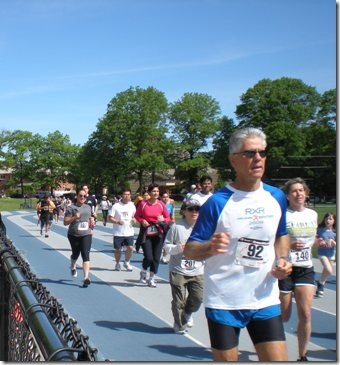 I am in Gray t-shirt

And then headed to the asphalt and trails… 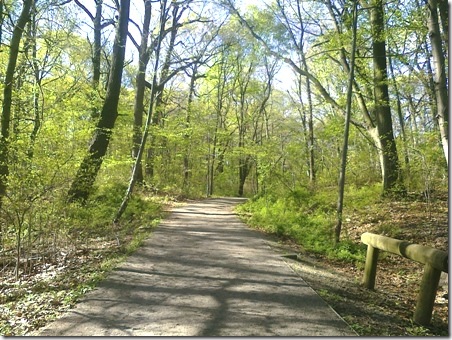 When I was getting towards the 2nd mile mark, I ran into Mo and Mickey! They came to support me =) (thanks honey) 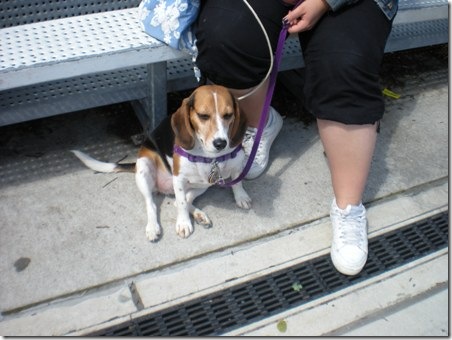 For the most part I felt strong but every time we would hit a damn hill, I felt like my heart was going to pop out my chest and do a little Tap Dance!

My leg started to really hurt after the 3rd mile but God must have been watching over me because we took a turn and ended up where I run at allllll the time so I whispered “you are home” and that gave me the push that I needed!

The race ended where it began which kind of sucked because at the time, the sun was beaming down and you could feel the heat rising from the track…those last 400 meters were horrible. 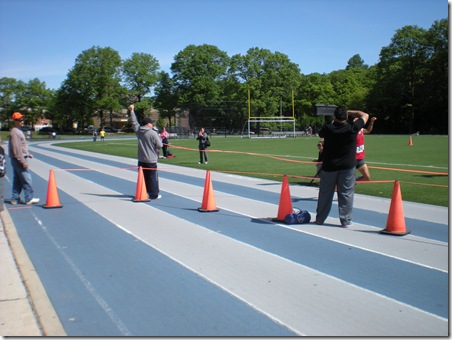 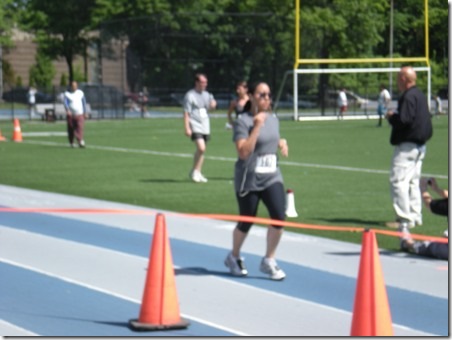 (thanks mommy for snapping pictures)

My Nike+ is a little off (4th mile) since I forgot to turn it off right after the race but here are the stats: 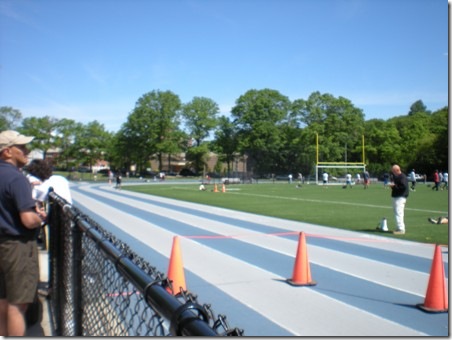 They had trophies for the winners but I was too hungry tired to stick around for the ceremony. 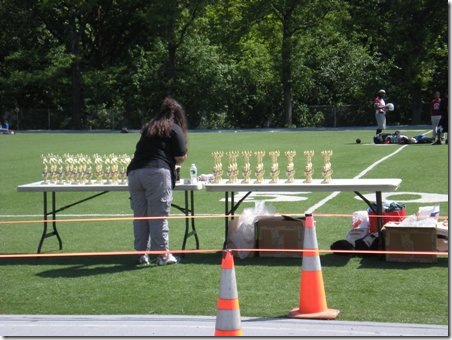 After the race, I went to go my see my sister since I knew she was sad that she couldn't be there to see me run.  And then I came home and ATE! My post race meal was inspired by Naomi, I saw this recipe on her blog the night before and I knew I had to try it!

First I made Egg Whites and then topped them with sliced Strawberries and placed all of it in a Low Carb Whole Wheat Tortilla. 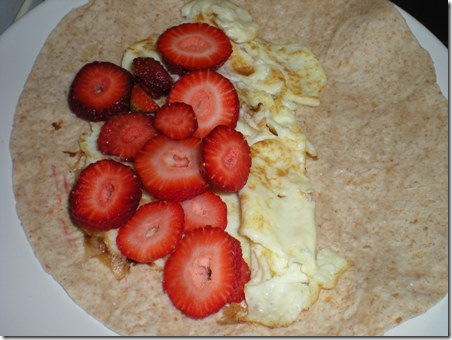 I folded it and placed it back on the skillet and cooked both sides. I then topped it with Oikos Honey Yogurt, Cinnamon, Light Syrup, and Peanut Butter 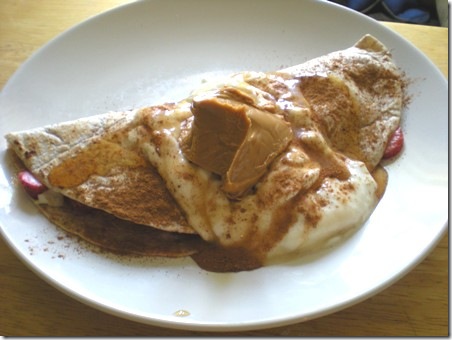 OMG this was a party in my mouth!!!!! Thanks Naomi for another fabulous recipe!

Later on in the evening my mom invited me over for din din.

She made Homemade Shrimp Fried Rice…I loved all the fresh veggies. 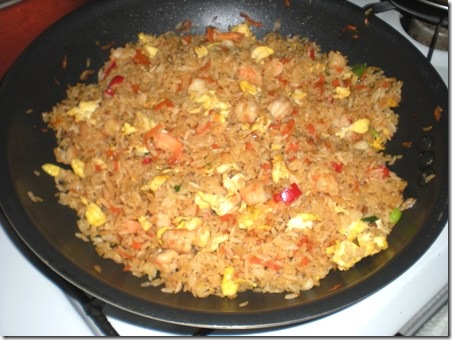 With Homemade Shrimp and Broccoli 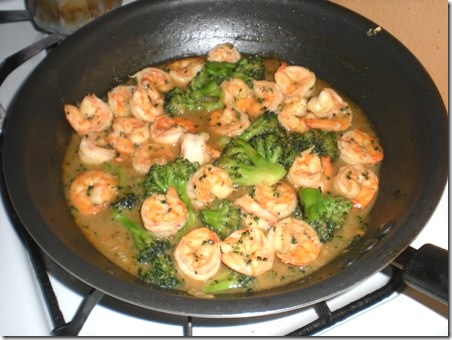 My plate with a Trader Joe’s Vegetarian Egg Roll 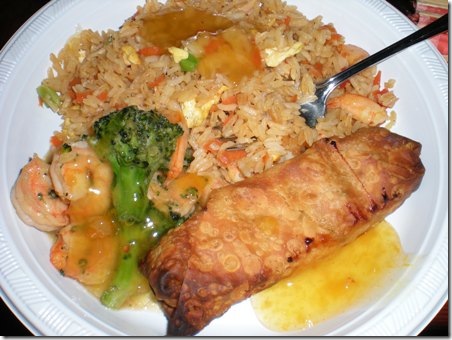 For Dessert she made Pastelitos with Guava and Cheese

I had two pieces… 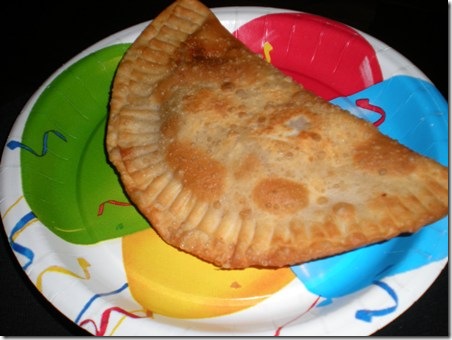 Inside…I love these so much! 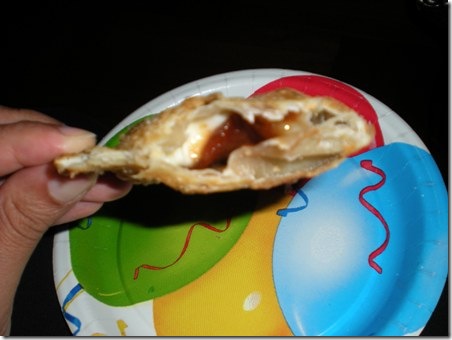 About a week ago I was tweeting that I wanted to get Core Fusion DVDs and Melissa replied that she had some extra ones that she was looking to sell…SCORE! Thanks Chica!!!!! 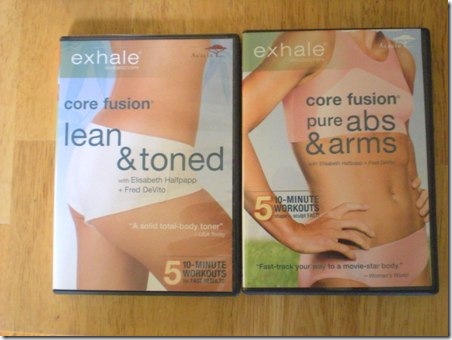 Core Fusion is like the Green Monster…you see it ALL OVER the blog world and I could not wait to get my hands on the DVDs. I tried it before on Fit TV and wanted to get my own copies…I’m a brat like that lol.

This morning I tried the Lean & Toned DVD…I skipped the lower body routines since my legs were sore from ayer. I really enjoyed the workout but need to work on my technique. I’m thinking about going to a live class so they can assist me with my form. 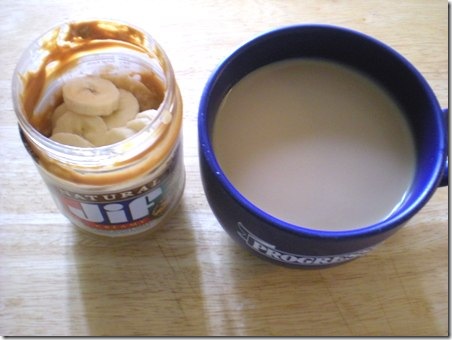 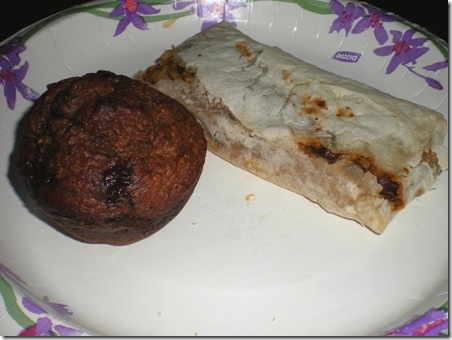 I have been craving a burger like crazy and you all know that I am trying desperately to give up meat. Thankfully about a few months ago they opened a new restaurant in my neighborhood called Flip Side. It is a small burger joint which also offer Salads, Paninis, Flat Breads, and of course Shakes!

I ordered the Veggie Burger which comes on a Whole Wheat Bun and side of homemade potato chips. 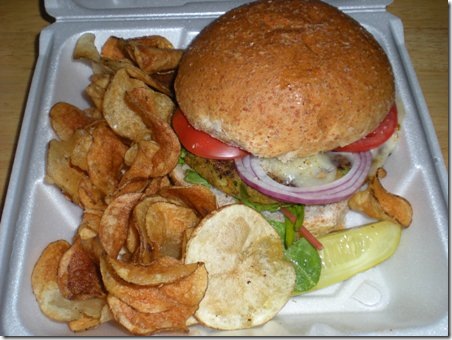 One thing that I found strange was that when I asked for American Cheese on it, the girl stated that they only had Swiss or Provolone…and I just saw on Yelp that someone else wanted American Cheese and they also said no…for some reason they refuse to put American Cheese on their vegetarian burger…are Vegetarians NOT American too???? I am going to call them mañana and complain about that…

I DID like the burger though, it tasted fresh and you could tell that it was not overly processed. It will filled with Carrots, Peas, Corn, etc… 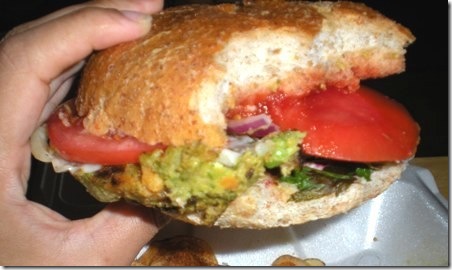 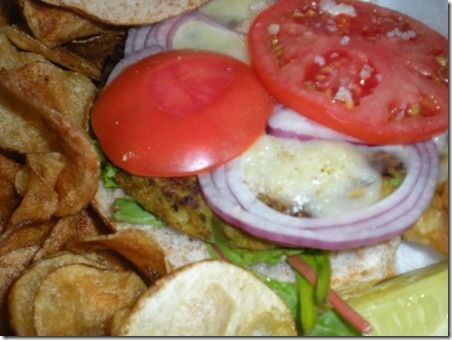 They also had Sweet Potatoes Fries which would have been great IF they weren't sooooooo soggy. I ended up eating about 6 and tossing the rest out. I hate wasting food but I hate eating crappy calories even more lol. 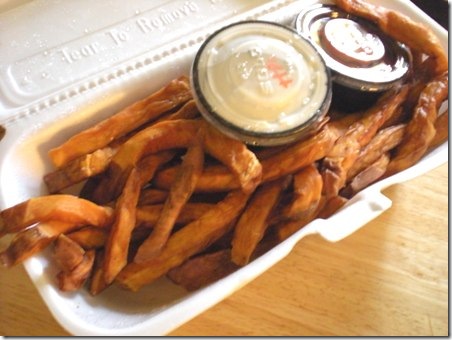 The star of the show…Strawberry Milk Shake with Whipped Cream and a Cherry on top. 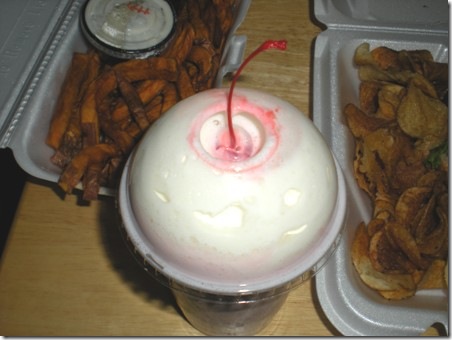 Will I order from here again??? It depends on what they tell me about the American Cheese lol

Is it me or is that just strange? Why can they put Provolone and Swiss Cheese on the veggie burger but NOT American?

Have a great night loves!