I am in love and NOPE not with a boy but with IntenSati! I am enjoying all of the workouts…to the point that I went to two classes ayer =). I even went to one on July 4th! All the teachers are great in their own way. In Sunday’s class which was taught by Erica, the theme was fun…and it WAS. She had great hip hop music and the whole time I felt like I was in a music video. Ayer I started my day with StrengthSati which was taught by the Founder, Patricia Moreno. At first I was scared because the day before, I did an hour long upper body strength session because I thought the class ayer was regular IntenSati but when I looked at the sheet before going to bed; I saw that I was TOTALLY wrong. The class consisted of a lot of strength training and I thought I was going to die but thankfully I made it to the end. After class, I spoke with Patricia about the IntenSati book and she offered to bring me a copy but I declined because I was going to go to Barnes & Noble to pick one up right after. Unfortunately, I went to two different B&N’s and they were sold out =/. I emailed Patricia and worked it out so that I could pick up the book at her evening class =)

After my morning class, I decided to run some errands and then met up my sister for lunch…I had a Eggplant slice of Pizza with a Starbucks Iced Vanilla Skinny Latte 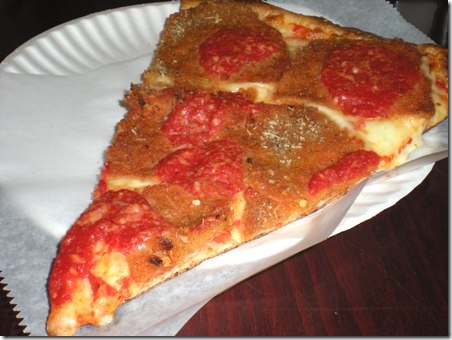 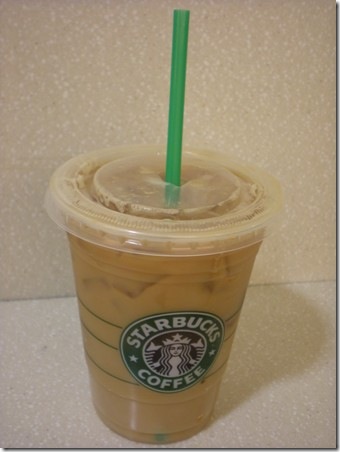 I then did some grocery shopping, my plan was to go home but my sister told me that my mom took my niece to get wet at the sprinklers at Forest Park! I grabbed my bags and walked over to the park in 100 degree weather with a bag that weighed around 30 pounds! It took me about 15 minutes to get there and I was BURNING UP! The minute I got to the park I took off my sneakers and grabbed my mom’s flip flops and joined in the fun! Sometimes you just have to be a kid! I filled up some water balloons for my niece and her friend and they had a blast! 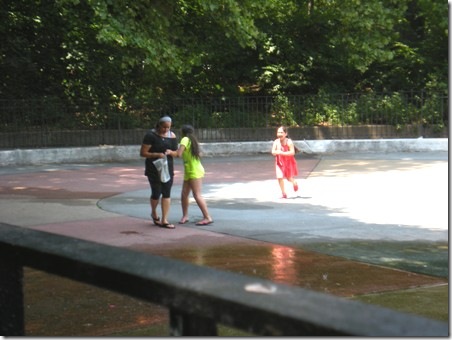 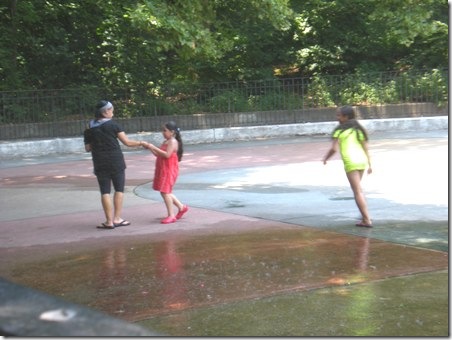 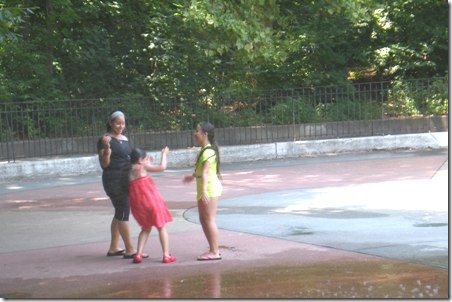 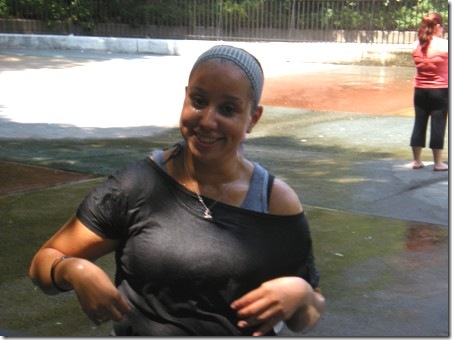 While I was at the park, I had a Pineapple Ice 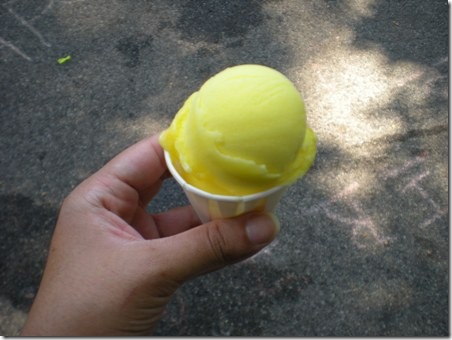 This was a perfect summer afternoon!

I rushed home, took a shower, and made myself a Green Monster before heading back into the city for IntenSati. This Green Monster consisted of 1/2 a Banana, Spinach, Zico Coconut Water, Peanut Butter, and LMM (someone asked what LMM was, it is Light Muscle Milk) 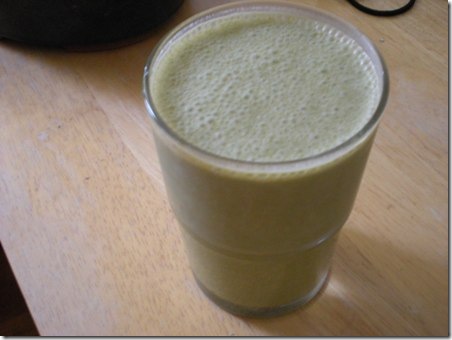 When I got out of the subway, guess who I saw?!?!?!?!?! MIRANDA FROM SEX AND THE CITY!!!!!!!! Ya’ll I squeaked like a mouse when I saw her! You guys know how much I love love love love SATC so this was EPIC for me. Unfortunately, I didn’t say anything…she was with her daughter who was in crutches and they were trying to get a cab. I didn’t want to bug them.

After that fabulous celebrity spotting, I got to the class and found Missy in the crowd of people (actually she found me lol). I heard that Patricia’s classes are usually packed but this was nut, thankfully we were able to find a spot. Sooooooo I have a confession…don’t laugh at me lol. Ayer I became overly emotional during the end of the class when Patricia was speaking to us and I could not help but start crying. I was sitting there and I could feel the tears falling but thankfully they blended with my sweat…when we got up and opened our eyes, I asked Missy if she could tell that I was crying “hmmm yea a little” crap! Have you ever met someone and they just radiated positive energy? Well that is how I feel about Patricia and it seems like I am not the only because she has a HUGE following. Somebody asked me the other day if this is like a “cult” and I was taking back by that. It is easy for people to judge something from the outside looking in but I think it is better to try to understand it before passing judgments. YES you are screaming things out while you are working out, but what is wrong with that? What is wrong with telling yourself that you ARE STRONG, BEAUTIFUL, and DESERVE HAPPINESS? For the past couple of days I have been repeating one of the affirmations to myself “Everyday in a Very True Way, I co-create my Reality” just saying these simple words, makes me feel like I can do anything.

After class, we met up with Missy’s boyfriend at Whole Foods for din din…I picked up a some sushi; Spicy Shrimp Tempura with Multigrain Rice. 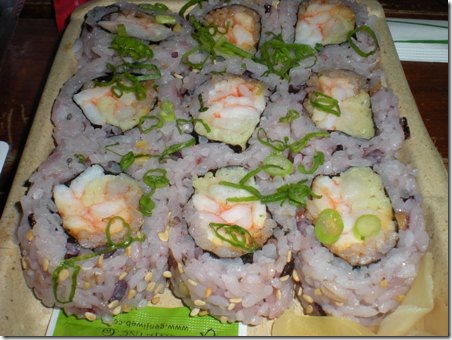 This was sooooooooo good!

With a Zico Pomberry Coconut Water 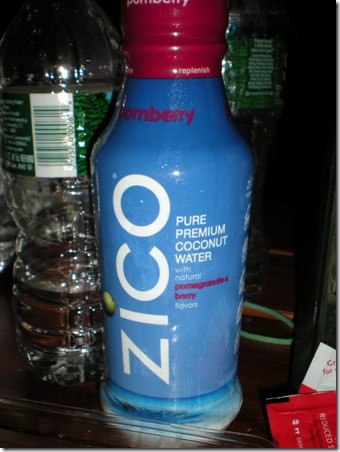 This morning I woke up at 4:45 AM for another Class and it was amazing! Natalia has such great energy…she reminds me of the Energizer Bunny…she keeps going and going lol. I love that she literally bounces around the room to make sure she gives everyone an extra push and this girls body is SICK! Just looking at her, makes me want to push a little harder and jump a little higher. 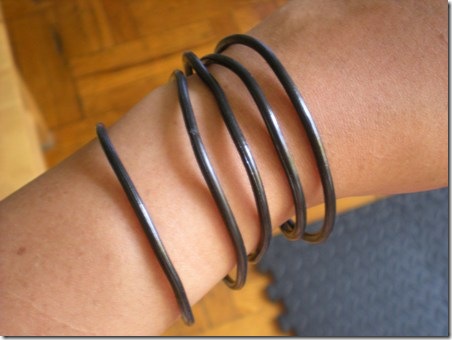 For Breakfast I had OIAJ with 1/2 a Banana, a Sprinkle of Chocolate LMM and my usual Cafe Con Leche… 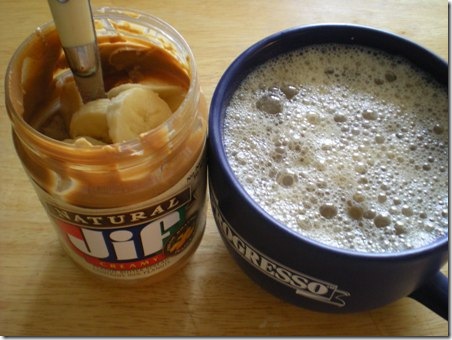 I am going to dive into the IntenSati book while I wait for my package…. 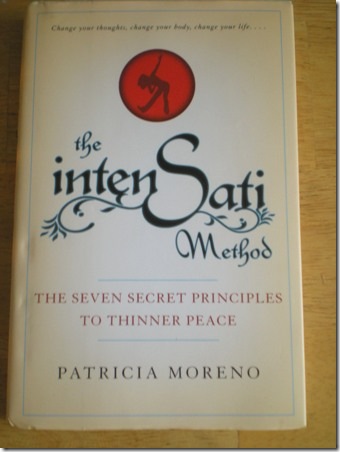 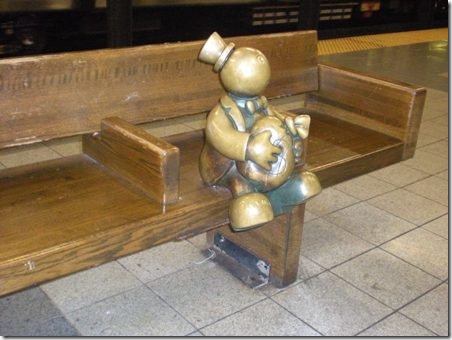 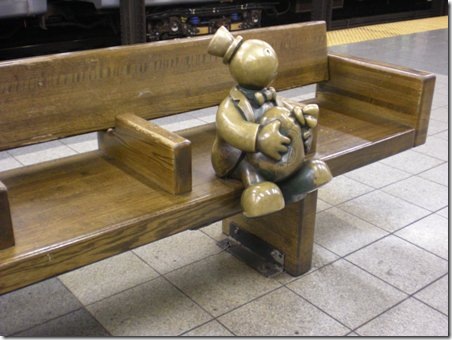