Ever since I watched the reality show Fight Girls back in 2006, I have always wanted to try MMA (especially Muay Thai) so when I was invited to check out the new UFC gym that opened in the city, I jumped at the opportunity!

After a crazy Friday morning of training clients, I headed into the city to try a MMA Class with my cousin. I was disappointed that my train was running late and made me miss the beginning of the class but trust me I still got my ass kicked! If you never tried an MMA class, here is some info about it:

The MMA Workout™ represents the culmination of everything we’ve learned and is the most complete and demanding class we’ve ever seen. Learn new skills and experience what it feels like to enter into the ultimate fighting challenge. Stepping into our unique bag cage environment for The MMA Workout™ requires complete physical and mental focus. But once you’ve tasted the self-confidence that comes at the end of the toughest hour you’ve ever spent in a gym, we know you’ll be back for more.

My first impression of the gym was “WOW”…such a nice facility! And ladies, the lockers/showers were so clean and pretty! The manager Ailin was very friendly the minute I walked in. 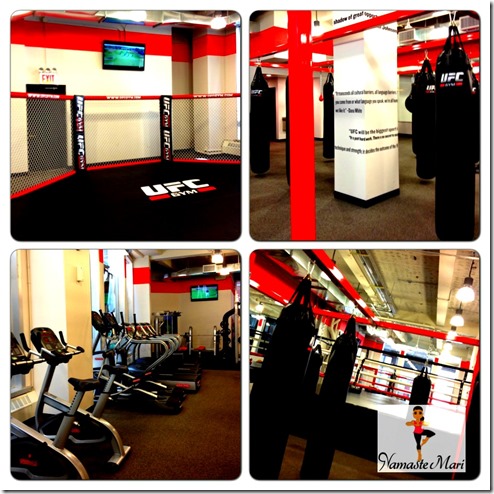 I am not going to lie, I was pretty nervous to take the class. I hated the fact that I arrived late (as a trainer, I hate being late…it is a sign of disrespect in my eyes) and secondly, it seemed like everyone there had taken the class before and I didn’t want to look like an idiot. I checked my ego at the door and put my gloves on.

My instructor, Aires has been in the industry since 2000 and has competed in Judo, boxing, BJJ, and Muay Thai kickboxing and Is certified through IFPA, ACE, and NASM. I am so grateful that he was so patient with me and made it a point to really focus on my form so I wouldn’t get injured. I was intimidated by the punching bag and kept loosing my balance when I would do kicks but with some tweaks that he showed me, I saw some improvements. When it was time to do some punches, I was actually pretty excited and I’m glad to say that they were MUCH better than my kicks. Also, one thing that I liked about the class was that it was Tabata style (timed intervals). At the end of the class we did conditioning moves which included, Squat jumps (yay one of my faves), pushups, fast feet, lunges, etc.

By the end of the session I was drenched and I loved every minute of it. I stepped out of my comfort zone and tried something new. I was no where as good as I thought I would be and probably looked like an ass at some points but I had fun doing it and would love to go back again!

I highly recommend trying out a class AND if it’s your first time, the class is FREE! Go check out their schedule and sign up

Me and Aires, after the class 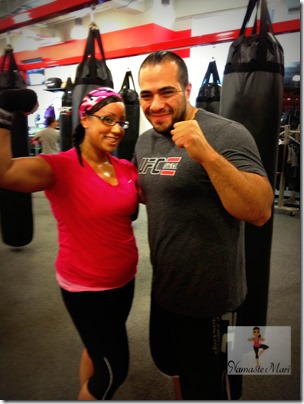