Hey loves!!!! Technically it is already the afternoon but not for my West Coast peeps so it all works out ha. I did have the video recorded earlier but had to run out to the post office so I couldn’t post it but honestly I am a firm believer that everything happens for a reason. On today’s MMR I speak about Sisterhood of the Fierce Traveling Journal and a Movie called The Lunchbox.

Well the reason that I had to run out was because my package from the traveling journal was shipped to the wrong post office and I had to go pick it up. The other post office is in a predominantly Indian neighborhood and I went to an Indian store and asked them for the lunch box that was featured in the movie (the lady  was impressed that I saw the movie and had a photo lol) unfortunately the one that they did have was too big but she is going to order a smaller one for me. People this lunchbox is so awesome…it look like a thermos but it comes apart into different compartments and you could put all your various foods in it. This movie is so great and if you have Starz; it is on demand (not in HD) right now.

This weekend I began to personalize my Journal. I am part of Team Focus and decided to paint a camera in the inside cover (I talk more about this on vlog) 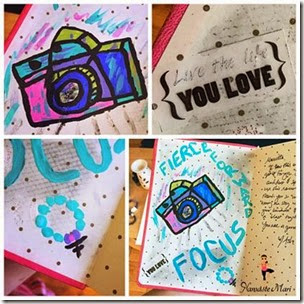 Have a great Monday and make it awesome!