I had such a great weekend which included meeting with clients, running errands, running, and watching a couple of good films which I want to talk about today. Also I want to share how the Universe always knows what you need at the precise moment. I might ramble a lot today but follow the bouncing ball ha.

The first film that I saw was “Results” starring Guy Pearce and Cobie Smulders.

This was an independent film about personal trainers, their clients, and trying to make it all work. I don’t want to give away the plot but one scene in the film gave me such anxiety. Cobie was training one of her clients in the film and he basically told her that he didn’t want to train anymore. Of course she was hurt by this and it made her doubt herself and then he said something like “you can’t expect to be a trainer for the rest of your life” and that felt like a grenade going off for me! Can I do this for the rest of life? The whole weekend this one statement was bothering me.

Which bring me to my second film (and the Universe looking out for me). I was contacted a couple of weeks ago to review a Documentary titled “A Good Small Thing” but life got in the way and it slipped my mind. I was contacted again this past week and finally yesterday I was able to get back to them and I watched the film last night.

A Small Good Thing was the winner of Best Documentary at the Boston International Film Festival. 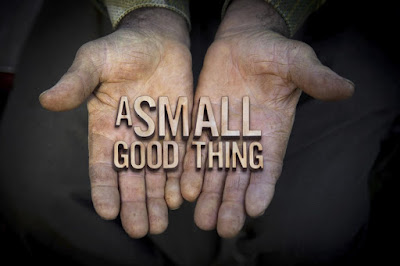 The documentary follows 6 different people who all reside in the Berkshires (Massachusetts) and have followed unconventional paths in their careers. All these people have one thing is common and that is happiness…this documentary shows that as long as you do what you want…you will find joy. I have to admit that some of the scenes actually made me tear up including when they were interviewing Pete and Jen (husband and wife who run a farm) and Jen said “Abundance comes in very different ways and money is just a piece of that…a piece of the puzzle”. YES YES YES!

I was meant to watch this film at that exact moment because it was the Universe telling me that this IS what I am supposed to do with my life. This is my Dharma!

I highly recommend this film and if anyone who lives in the Berkshires happens to read this and would let me crash on their couch for a weekend, while I work on their farm…please reach out to me! ha.

Watch my vlog below where I discuss both films in more depth and get super excited about the Universe sending me another sign which brought everything full circle!

*This is a sponsored post but all opinions are 100% mine.