So remember last month when I subbed for my yoga teacher and it was...hmm how do I say this politely? Oh yes, a shit show!

I told myself that I would honor my commitment and sub this weekend but honestly I had zero urge to return. Before returning, I received some feedback from my teacher and the ladies said that I had them on their knees for too long and they couldn't hear me (I guess, I am the first quiet latina...I kid I kid). I took these notes and made sure to prepare accordingly.

Before the class began, I was sitting by the front desk and one of the ladies whom walked out last time approached me. She asked if I was subbing again and I said yes and asked if she would be attending, I was waiting for a "no" but to my surprise she actually said yes. She also gave me some feed back and it was the same two things that my teacher had previously told me so I let her know that I was already aware.

Zumba was over and it was time for me to walk into the lions den; I was ready to see the disappointed faces. Amidst the "ehh" faces, I saw one friendly face; my classmate who frequents this class. Y'all, I felt like I heard the angels sing.

I released what happened last time and began to teach from the heart. Since the ladies had mentioned the knee problems, I created a standing warrior flow and I even included humble warrior and made a point to say that we all need to be more humble at times. I was conscious to speak loudly and also demonstrated more. Half an hour into the class and all hands were on deck...and by savasanah, I still had a full house!

After class, I was in the parking lot talking to my friend and she told me something that I am so grateful that she waited until the end to let me know. She informed me that when I entered the studio, a couple of the ladies said "oh no, not her". I was prepared for this but to hear that it actually happened, broke my heart. My friend told them to give me a chance and explained how difficult it is to stand up there and cover for our teacher, who is known as one of the best teachers in Queens.

The ladies gave me a chance, I taught from my heart and they opened theirs. We all humbled ourselves and enjoyed our time together.

Remember, if you fail at something...don't let it deter you; go back and slay that fucking dragon! 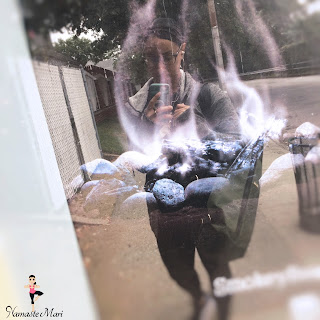 Watch my video below so you can see the shirt that I wore to make a statement without saying a single word....