Last week, a person that I recently met asked me what are some things that are a huge "no no" for me and I answered "Liars and people who make too much bodily noises" (eww gross). Which is ironic because a couple of days later, someone who I am supposedly close with, happened to lie to me (yet again).


It got me to think of two of the Yamas: Satya and Aparigraha. 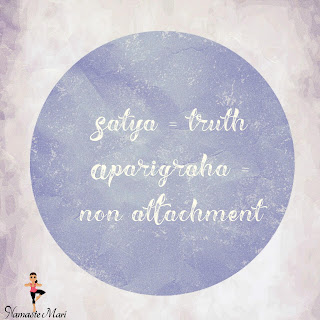 Satya which is the Sanktrit word for truth, referring to being truthful in one's thought, speech and action. Patanjali considers satya as a restraint from falsehood in one's action, words, and feelings or thoughts. Aparighraha. the virtue of non-coveting, non-possessing is a means of path of spiritual existence. In outer world, aparigraha manifests as non-possessiveness with simple living; while in psychological terms, it is a state of non-attachment, non-craving and one that envelops the sense of contentment.

For so long, I was attached to this illusion that this person would grow out of this phase and be truthful with me. Unfortunately they've been this way since they were a child and I needed to detach from this hope.

Now the hard part comes in...I have to separate myself from this person; last week was the last straw. I gave them the chance to be honest about an incident that occurred but instead they chose the path they always go down...lies.

Even though I am no longer allowing this person in my personal space, I wish them no harm and I will eventually forgive them (even if they don't care). The forgiveness, is for me because if I hold on to this resentment; they will still have this power over me and this incident will continue to replay in my head.

In moments like this, I realize just how much Yoga has changed my life. Before yoga...this would have gone down very differently.

Don't allow others to take you out your element and if someone has hurt you in the past, forgive them. "Holding onto anger is like drinking poison and expecting the other person to die.”