On The Mat With Mari: Three Kings & Some Lifting...

This weekend was full of ups and downs, including a broken freezer and "Christmas Part Deux".

First, lets start with the freezer..a few nights ago, Zen and I woke up to a noise that sounded like a helicopter in our living room. After getting my heart rate back to normal, we discovered that it was my freezer and turned it completely down. My super came to "fix" it but it was still a hot mess (literally). Thankfully my building was able to get a repairman to come the next day, unfortunately the next day we had a snow storm sooooo no repair man.

Things were quickly melting in my freezer so I thought "Hmmm what would Macgyver do?". And the light bulb moment happened...I put everything that was in the freezer, inside a garbage bag and stuck it outside on my fire escape (with a knot inside the window so it wouldn't fly away). I was able to salvage everything. Well almost everything; I had one casualty...a jar of Trader Joe's Marinara fell down and my bedroom still smells like an Italian restaurant.

Thankfully the repairman came just in time for Three Kings because I had a pie to make! A Cinnamon Roll Apple Pie to be Exact... 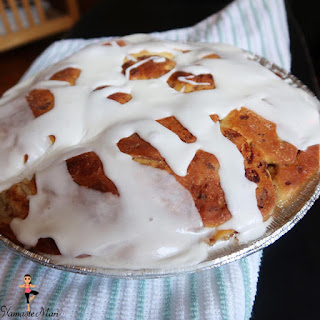 I found this recipe on Tasty and it turned out pretty good but it was a little under cooked in the inside. Next time, I will bake it for a little bit longer. .

Watch my video below to join me for Three Kings and a lifting session with Fred Durst...